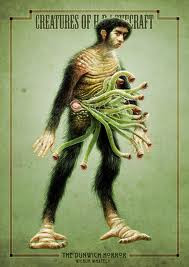 Two months ago I had the pleasure of visiting one of our local flea malls in Sweetwater Tn. I call it a flea mall because this market was as large as many modern shopping centers. The main building is an industrial size warehouse that is, at least, 100 yards long. I was happy to find, among the cheap Asian tools, Nascar banners, Avon, silk screened purses and cell phone booths, a book dealer. I purchased Lin Carter's Year's Best of Fantasy Stories Vol. 2 and Lovecraft's The Dunwich Horror which still has the price of $1.75 pasted on the back.

I had a copy of The Loved Dead, a collection of Lovecraft inspired tales, which I attempted to read last year and this was my only previous experience reading Lovecraft. I didn't read half the stories in The Loved Dead before I became bored with the content and posted the book on Paperback Swap. I'm glad to say that the stories collected in my $1.75 edition of The Dunwich Horror have fulfilled the legendary status associated with Mr. Lovecraft's writing.

This edition was published in 1969 and has seven short stories and a forward by August Dereleth. The first tale that really caught my attention was Pickman’s Model. This is the tale of a painter who produces ghoulish images. “Boston never had a greater painter than Richard Upton Pickman… Any magazine-cover hack can splash paint around wildly and call it a nightmare or a Witches’ Sabbath or a portrait of the devil, but only a great painter can make such a thing really scare or ring true.” Lovecraft could have been describing his on writing with this description. I’ve never read many vampire novels, Edgar Allen Poe or Steven King and the tales in The Loved Dead bored me because they were not scary. The seven tales in this edition The Dunwich Horror are, nearly all, creepy if not creepy to the point of horror.

The subsequent tale, The Rats in the Walls, gets high marks for creepiness too. In this story a New England gentleman extensively restores his family estate only to discover that the legends associated with his distant ancestors were true. The ancestral home was built above a pit where prehistoric rituals were practiced and they were not rituals to the God of the Harvest.

A majority of these tales, including The Rats in the Walls, The Hunter of the Dark, The Dunwich Horror and The Thing on the Doorstep, involve Lovecraft’s Cthulhu Mythos. Each of these provides additional information about the mysteries of the Great Old Ones, the alien horrors central to the Cthulhu Mythos. Lovecraft’s talent is that he does not depend on monsters of violence to provide the horror of his tales. He will provide a familiar historical background and then crack that background wide open to questions of; “How much do we really know about the Salem Witch Trials?” Certainly, the Great Old Ones are monsters with an ever increasing potential for violence but placing these mysteries into 20th. Century New England mixes the familiar with the unknown for maximum creepiness.

So, before this opinion piece becomse an essay, I really enjoyed reading Lovecraft and was happy to find that many of his works are available as Google Books. I can certainly agree that Lovecraft was a major influence on AD&D, as listed in Appendix N of the DMG, since these are tales of mystery, occult magic, monstrous outsiders and, often, investigation of unknown geography.

As I was reading the book many of the pages became detached from the spine but I managed to salvage all the pages. I’m offering this book free to anyone who cares to read it, just leave a comment and e-mail your snail mail address to ccreel at yahoo dot com, I’ll be glad to mail the book to anywhere in the U.S.