Inspired by a young man named Kahn and the real life adventures of my hometown gaming miscreants, the Knox Gamers, I present to the rpg blog world; Harn Ironfell's Dwarven Advice Column.

"They've all been reissued with rather risque covers."

Yeah, I didn't mention in the earlier post that the Gor books have gained a popular following among practitioners of B&D. The Google Books version displays the cover art pictured above, as if the original cover art by Boris Vallejo was not risqué enough? 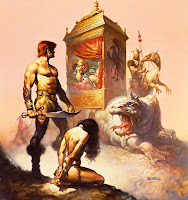 Along with The Hobbit, Dragon Riders of Pern and some Nancy Springer novels, Tarnsman of Gor was one of the earliest building blocks of my pulp fiction reading and fantasy role playing hobby. The tales of Gor or Counter Earth are a combination of Conan meets John Carter of Mars. The hero, Tarl Cabbot, is an earthman who is abducted to Gor and finds adventure in a barbaric culture controlled by a small group with highly advanced technology which is, of course, called magic. (This, high tech culture controlling barbarians with their “magic,” is a plot element common in many a pulp fantasy novel, including Fritz Leiber’s Gather Darkness.) The books over flow with magic, sword fights, scores of alien creatures like the Tarns, science fiction and, with an added appeal to adolescent boys, slave girls.

I believe there are twenty-eight novels in the Counter Earth series and they’re all supposed to be in print. I never see these books available at used book stores but I’ve been able to find a few copies of the books through Paperback Swap dot Com. I will be posting a recent publication copy of Tarnsman of Gor for trade through this service, PBS.com, right away. I noticed that on the new copy of the book, the artist bio is as nearly as fictitious as the contents of the story. I’ve also noticed many comparisons to other works of pulp fiction and I think I’ll feel inclined to continue this book review when I complete my reading.

My Opinion of Encounter Critical

Since Jeff Rients has declared 2010 The International Encounter Critical Year I’ll throw my hat into the ring. I discovered E.C. last year and I immediately thought that the game is brilliant. Not only is E.C. an imaginative game system but, as has been bandied about the entrée-net, E.C. began as an rpg publishing practical joke. “This is gaming from another past, a garage-made RPG designed circa 1979 by two mythical gamer-buddies,” S. John Ross even wrote the game in character using a personality named Hank Riley.

If we can believe anything written in this rule set than E.C. is an rpg for all genres and encourages mixing these genres. This is a big selling point for me because who wouldn’t want to have laser guns, Road Warrior style cars and a Tyrannosaurus Rex or two all in the same role playing campaign? The twelve player races include entries from the two most popular Sci-fi franchises of all time along with the obligatory fantasy races.

E.C. has an old school rpg look and presentation complete with pages and pages of percentile based skill charts. I loved this skill system since the use of percentile dice is nonexistent in D20 systems. In fact, the E.C. system exists without the use of the d20 at all. Brilliant, Encounter Critical is the Anti-D20 in a gaming environment dominated and seemingly dependant on the D20 System. I believe the development of E.C. was a study in how to build an imaginative and independent rpg system from scratch. S. John Ross has released a digital document titled the Phasic Cyaborg Edition which includes a discussion of his development process. I have not purchased this product yet but another payday is just around the corner.

I’ve introduced E.C. to many friends and relatives, I’ve run an adventure of the game with my gaming group and I’ve been scheduled to run the game at a convention. Not everyone I’ve introduced to E.C. shares my enthusiasm, some have declared the system broken. To these detractors I must point out, the same man who created the complexity and challenge of Encounter Critical is also the creator of the simplicity and free spirit of Risus.