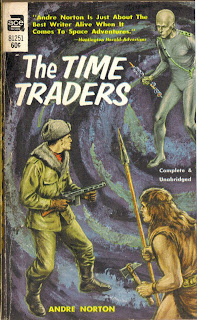 Miss. Norton’s novel The Time Traders is another oldie, but, a goody. The Time Traders was first published in 1958 and the tone is typical of that golden age of Sci-Fi Lit. The main character, Ross Murdock, is a juvenile delinquent who is drafted into a top secret government program instead of receiving criminal detention. This program or project involves tracking the secrets of the “Reds” but the chase is through time as well as across the globe. The backdrop of the Cold War does not have the effect, with the immediate relevance, it held sixty years ago but it still serves as a meaningful historical marker and plot point.

The “project” takes the Time Agents to a time on the fringes of civilized history. The agents pose as traders of the era, the Bronze Age of Western Europe, in order to move through the ancient society in freedom. They, the agent -traders, must learn the language and practices of their historical setting to pass as legitimate members of the ancient society. I’m a real sucker for these 1950s era Sci-Fi and Norton has woven an intriguing story with the elements of time travel, history and alien involvement. The pace of the book was quick and I seemed to fly through the one hundred and ninety-one pages. The plot pace reminded me of a Robert E. Howard adventure containing action around every corner or chapter. The Time Traders is one of the Sci-Fi books on the 501 Must Read Books List. The Time Traders is also available as a Google Book, through Project Gutenberg and Paperback Swap dot com.

Dungeon Dressing: What’s that drawing on the wall?

I’ve begun designing a D&D or Labyrinth Lord adventure for my game group. The setting for the first encounter is in some ruins of an older civilization. I want the ruins to be interesting and too provide clues about the former inhabitants for the players. So, I’ll include statues, fountains, decaying manuscripts, pottery and murals among the artifacts for the players to explore.

I’m sure this idea’s been covered before in some published gaming text but here’s my take on twelve ideas for murals and, or cave paintings for rpg adventures.

There's also the chance that the mural may be an advertisement from a forgotten and, or alien culture. The message may be as common as "Eat at Joe's" but this remains a mystery if the script is an unknown language to the players.

Plot ideas from my e-mail box

I imagine that you have all gotten these e-mails with titles like "Strange but True." I just got one of these mails this past week and found a few of these cultural tidbits too priceless to send into the trash folder. 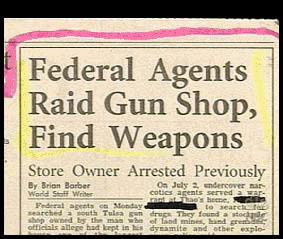 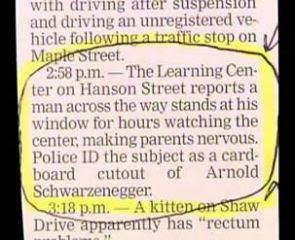 and you might want to avoid Shaw Dr. for the time being.

Finally: Uncle Rico is at it again...

Phasic is a fanzine unique to the Encounter Critical community. It was originially created by Jeff Rients in the fall of 2008. Jeff had mentioned reviving the ‘zine earlier this year but I’ve taken the liberty of producing the current issue of phasic in an attempt to stir the productive juices of the EC community. Weather the productive juices are sufficiently stirred I enjoy producing the ‘zine and have an outline plan for a subsequent issue which should debut later his fall.

Issue two is a tiny little affair which contains an adventure for ambushing player characters. Of course, I had to include five for six non-player characters in order to do the ambushing. I’ve posted the file of phasic 2 at Scribd so that the rpg community and the world-at-large might enjoy this bit of one-sided silliness. Consequently, if Scribd ever requests a membership too download any of my files just send me an e-note because most of my files are small enough to fit into an e-mail attachment.