I have been using my version of the generic rpg character sheet and determined that it needed a few tweaks. The tweaks are few but I think it helps the layout of the information on the sheet, at least, a little bit. I have stored the file at Scribd for needy gamers everywhere. (The file is in pdf format, of course.)

On other fronts, I should be able to finish the rough draft of phasic #3 this week and share it with the guys in the Encounter Critical mail group. Once I finish the proof read stage, probably around Feb. 8th or 9th, I will post phasic #3 on Scribd too.

Book Review: A Business of Ferrets 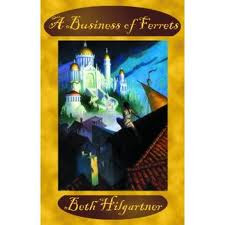 A Business of Ferrets by Beth Hilgartner is aptly titled as it is the story of the young thief Ferret and her friends, Owl, Mouse, Squirrel, Donkey, Kitten and Sharkbait. The bond and innocence of this group of young friends is dangerously contrasted with the Council Houses of the court of the fantastic Empire of Bharaghlaf. Throughout the tale the Council Houses show how childish and irresponsible they can be.

The names of the children serve as a foil for the ultimate tone of the plot of A Business of Ferrets. Mrs. Hilgartner cleverly builds her tale in increasing steps of danger and intrigue. The children are Slum Rats and their rights as citizens of the Empire are tenuous, at best, in an Empire with no prohibition against the evils of slavery and drug distribution. Rather, these crimes are the very markets which are controlled by the Council Houses of the Empire of Bharaghlaf. Ferret and her friends become deeply and often uncomfortably involved with the Houses in the slow progress of this craftily constructed tale.

A Business of Ferrets begins without pretext but the trappings of the tale are those familiar in fantasy fiction; magic, myth, royal courts and intrigue and thieves guilds with knife fights in allies. I believe that A Business of Ferrets was listed as a graphic novel because the shocking nature of the climax of the tale which starts simply enough with a group of slum kids who’ve named themselves after woodland creatures.

Where does the Polyhedral Windbag blow?

I had a little hiatus from the entree-net during Nov. and Dec. and my work, at work, is busier during the winter. Earlier this month I was able to make some progress with the layout for issue three of phasic, an Encounter Critical fanzine I produce from time to time. It is a tiny little product and is nearing the proof reading stage. I think I can get the pdf published, at least, by the first of February. After phasic #3 is finished I intend to begin a project using the Mutant Future rules. But, I'm sure I'll have phasic #4 as a side project and, or some other E.C. related design.

I'll see you all again soon!