Damnation Vans I have known

Yeah, I've been away. Well, I've actually been right here  but my internet time has been all focused on work, the job, making the doughnuts, etc.About a month ago, I did announce on the Encounter Critical yahoo group  that I'll be doing a Special, Damnation, Issue of  phasic, the E.C. fanzine. I even read the novel, Damnation Alley by Roger Zelanzy in preparation for this special edition. Um, yeah, more on that later.

I've gotten a hand full of submission and haven't written a thing for this issue. The submissions include  material by a pretty heavy hitter in rpg writing and blogging circles. This is good, to have an issue of phasic in which I'm not the contributor of the majority of the material. I think I will do an illustration for the issue as my sole contribution.

If any of you Polyhedral readers would like to get in on the act, just write some nonsense about a transportation device for an rpg and e-mail it my way. (Do I need to give ya my e-mail?) By "an rpg" I mean, it needs to be  Encounter Critical  compatible. I feel that E.C. is pretty compatible with the early editions of Basic D&D and BRPG. (Isn't that the Ruin Quest system or somethin'?)  If you have ever played an rpg you're probably in the ball park for E.C. material creation.

So, for your viewing pleasure, here's a photo of a Damnation Van I've known. I took the photo, if that counts as "knowing" it. 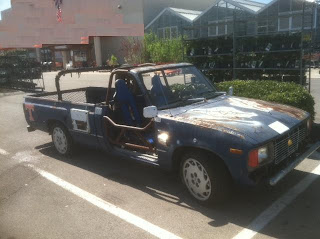