Here's your stat block for the Aquatic Turtle Rat. I followed the Labyrinth Lord stat format:

What is it about this Post-Pulp fiction that I am so fond of? I believe it is light, quick and enjoyable nature of these little novels that hold my interest. I've just started reading Orbit One by Lionel Fanthorpe and it is, at least, as light as Time Echo.

In the first thirty pages of Orbit One there is little to distinguish the book as a Science Fiction story. So far, the plot revolves around four central characters, one of which has just committed suicide, as far as we know. This could be any pulp mystery or espionage novel set around a corrupt director who stages a suicide to escape his corporate crimes.

The act that appears to be suicide, Director Fletcher Starbuck, who was an excellent pilot, wrecked his personal star ship. Other main characters are the chief investigator, a long time co-worker and friend of Starbuck, and Starbuck's second in command who will be come the new director once the mysterious events are resolved.

So, the setting; a colonial experiment on a distant planet. Other elements that hint at sci-fi are; hover craft and personal rocket-ships. These three elements alone base Orbit One in Science Fiction or I'd be reading  any ol' espionage novel. I'm not sure what I expect out of the first thirty pages of a book?

I have been neglecting some other duties and contributing to the community project over at Rended Press. This has been a relaxing and productive distraction for me and I intend to continue to participate until the project is complete.

The process was made a bit easier with this creature creation drop table, also a product of MWSheemer, Mr. Rended Press himself. I randomized the Aquatic Turtle Rat, here's an edit of the description I wrote for the community project;

"These aquatic turtle rodents have a head much like a rabbit with a long neck leading into their turtle like shells. Their powerful webbed forelimbs resemble a wolves, including claws. [1d6 damage] Their webbed hind limbs are more reminiscent of a rat with the shell and tail of a turtle. The shells of adult Turtle Rats average four feet from head to tail.

Turtle-rats are quick carnivorous scavengers, usually encountered in schools of 1d8 members. They will attack by springing forward with their powerful front legs and attempt to bite and, or claw their intended prey. [Two attacks per round possible.] The waters near their homes usually contain the remains of their past prey, including any valuables owned by these previous victims. These remains and treasure may be found at the bottom of the Turtle Rats watery abode."

So, the Aquatic Turtle Rat is classified as a medium sized creature but I haven't created a "stat block" for them. I'm certain your all capable of adapting the A.T.R. to your own needs if  you so desire.

Now I have to solicit some illustrations for the Aquatic Turtle Rats.

The "splash" or "tag line" for Time Echo reads, "Out of the gray mist vague shapes were forming." Here's some gray mist for ya, I've devised my own category for these old paperbacks, which are not old enough to fit in the Pulp Fiction category, I call them Post-Pulp. The whole lot of them, the second generation Fantasy and  Sci-Fi writers, Fanthorpe, Carter, Stableford, they're all Post-Pulp.

Fanthorpe's the pulpiest of them all, his work borders on the Action-Adventure genre which isn't, normally, on my reading list. Time Echo has a simple enough plot; set in the year 2309, protagonist, Mike Grafton, flees the forces of dictator Rajak the Magnificent and stumbles into a time-machine during his escape. That stumble into the time machine is where Fanthorpe begins to work his pulpy magic, or the art of the vague gray mist. Grafton goes back in time to 1809 and Fanthorpe's backdrop is now, conveniently, the Napoleonic campaign. Fanthorpe doesn't pass up the opportunity to give us a four page biography of Napoleon's rise to military power.

This book is only 144 pages long and, by page 88, I could not see Fanthorpe resolving his plot at the finish line. This tale reads like a writing experiment in character development. Each character introduced to the story gets many pages dedicated to their physical, psychological and emotional investment in the plot. This technique doesn't progress, enrich or support the plot line but, does add to Fanthorpe's word count and leaves the book wide open for plot flaws.

The most outstanding flaw in Time Echo is this line, "This was more that the art of any Houdini." Vague gray mist and all, this phrase is used by an Englishman, a native to the 19th Century,  seventy years before Houdini was born.

Fanthorpe spends about twenty-five pages each introducing the four central characters of the tale. Then, he ties up the plot with his trademark psychedelic scene. In a chapter titled "Realm of Insanity" two of the main characters enter a dimensional travel device, or vehicle, too, again, escape the security forces of Rajak the Magnificent. The dimensional travel device is, of course, untested but should take the passengers to an alternate Earth. Instead, it takes them on a seemly unending ride in the Tardis where a kaleidoscope of colors serves as a backdrop for multiple alien images and scenery. Due to a short circuit, the passengers eventually return  to their own dimension and time, Earth, 2903.

There is a lovable quality to Fanthorpe's work, a child like simplicity in the stories which don't require a basis in logic. Lists of random items seem to compose his tales; time travel, the Napoleonic Era and George Orwell's Eurasia all stew into a "time echo." The setting, 2309: Eurasia, could be the far future of Orwell's 1984 which Fanthorpe pays homage to in the following lines, "What, the cigarettes? ... These are only cheap ones; the good ones, now, that's what I call a smoke, but you can't get them unless you’re a member of the inner party."

Inner Party member or no, Fanthorpe's many books are fun, relaxing reads emphasizing the occasional simple joy of a twisted, chaotic plot line.

You will never hear me say the previous phrase. I have never been diagnosed with A.D.D. but I do have many interests. Our 21st Century life style creates situations which resemble A.D.D. We have to; go to work, get the kids, cook dinner, do the laundry and we call this multitasking. That's my evidence that I do not have A.D.D., I have limited time to dedicate to my personal interests.

I should be working on issue five of Phasic but can't quit thinking about running an E.C. campaign, there are so many unexplored areas in E.C. The whole array of rules and the game mechanics are uncharted territory for gaming.

The Warlock: There is no traditional, sprawling list of spells in E.C. and spells are not level specific.

Weapons of Power: With the hit bonuses provided in E.C. there's going to have to be an array of power weapons and armor to fight the increasingly powerful player characters.

My intention is to attempt to play E.C. as written. We all acknowledge that no one played AD&D "by the book." We were all playing Basic D&D with the AD&D elements plugged in where we liked. I am afraid I will bring the same approach to playing multiple secessions of E.C. I already have some preconceived ideas about how the game mechanics will progress. Combat saves will slow down progress but will provide a chance that n.p.c.s will survive the combat bonus happy player characters. I also can't agree with, "Attacks go in the same order, melee first, then missile." (p. 22) That ain't gonna happen, it's just illogical.

As for the content from Time Echo, the antagonist in Time Echo is named Rajak the Magnificent. He's an evil dictator, like Darth Viraxis, I'll be using this name for the Warlock boss in the campaign plot. 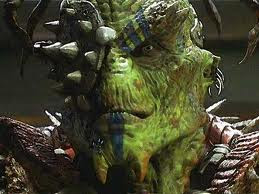 So, enough of this nonsense for now. It has been suggested that I'm O.C.D. and I think that might be a bit more on the mark.

I was looking at my blog roll this weekend and discovered that, last October, Max of the Malevolent and Benign blog had posted a message about his new Tumblr account dedicated to Encounter Critical. He calls it the Phasic Archives and he's still updating it, almost daily. Malevolent & Benign is one of the oldest rpg blogs to mention E.C. and certainly out dates my sophomoric synopsizes.

I had to take a stroll through these pics and found this Walking Eye. I will definitely be using these in the E.C. campaign which I'm brewing up.

It also occurred to me today that it would make much more sense if the scale for the map of the Might Land, from the E.C. rule book, was 500 miles per inch, rather than, 50 miles per inch. I'm not advocating that the scale of the map be officially changed, this is just  food for thought during my design process.

I might as well throw in a few design notes; the theme of the campaign is, Assignment: Outpost 6986.
-- Outpost 6986 is an abandoned and forgotten Vulkin installation from before the Fall of the Sky Gods.
-- P.C.s are recruited to locate the outpost and recover any lost tech. it may hold.
-- Campaign will included at least one random element from; Adventure Time: Season 1, Epic Illustrated
and  the Lionel Fanthorpe novel Time Echo.

So, stay out of the heat ya street urchins and I'll try to do the same.