Yeah, I live in East Tennessee so why do I have a post titled Goodwill of San Diego? I think this may have been covered before but, if you have a book acquisition problem, as I do, do not visit this e-bay vendor;

I believe one of the other FRPG blogs may have mentioned this e-bay book vendor but I can't recall which blog it may have been. A few days ago I found the Pazio Planet Stories printing of R. E. Howard's Almuric through this Goodwill sale. The San Diego Goodwill only seems to sell books through e-bay and there are many more interesting books in their sell that gamers would be likely to enjoy reading and owning.

The Complete Stories of Theodore Sturgeon

and The Gormenghast Novels of Mervyn Peake

I've given you all fair warning. Do not visit that vendor if you have a book acquisition problem. Happy reading!

If you've read my blog you should have no doubt that I'm a bit nostalgic about books. And, as if I needed some more books, I feel the need to acquire the more of the Planet Stories publication series by Paizo. But I have searched high and low across the internet and can not find any complete list of the books that have been published in this series. Perhaps I haven't use my google-fu to my best ability on the Paizo website?

Can any of my fellow grognards inform me of such a list at some internet location?

Thanks and have a great Friday!

A silly new spell for silly gamers like me.

I tend to throw thing together for rpg games based on things I over hear around the gaming table or at the pub. (So be warned, I may steal your words.) For example, I could have sworn that I heard my game buddies talking about how to make a Dire Wolf. Apparently the process involves feeding kittens to a wolf cub? The things that come our of the mouths of gamers!

A bit later, the same night, I came up with this spell.

Sharkwave: This spell allows the caster to create a wave of salt water in his hands. The wave then crashes into the intended victim and produced a shark which promptly bites said victim for 1d12 of damage. There is a 50% chance that sorcerer can increase the number of sharks produced by one per level. The components for the spell are a sharks tooth and a vial of salt water.

Perhaps this should be titled; What we read when we read about rpgs. It has been noted that I read a lot and I have determined that all this reading is the equivalent of doing the research with out doing the writing. The writing does eventually come about but probably at a much slower pace than is desirable.

I was doing a bit of "research" recently, reading the ol' 2nd Ed. AD&D Dungeon Master Guide and I read a paragraph that looked familiar. I have reached the point in my reading and research career that I read almost all of a book. This is to say that I read the introductions and the "notes about the author" but am not likely to read the glossary or bibliography. So, I was reading the intro to ye ol' DMG and came to this section;

"The rules of the AD&D game are balanced and easy to use. No role-playing game we know of has been playtested more heavily than this one. But that doesn't mean it's perfect. What we consider to be right may be unbalanced or anachronistic in your campaign. The only thing that can make the AD&D game "right" for all players is the intelligent application of DM discretion."

I believe that passage speaks volumes about what is popularly called the "old school" attitude of fantasy role playing games. These ideas have been written, time and time again, across the blog-o-sphere; unlike the rules of chess, the rules of role playing games are not intended to be the final judge of an action in the game. Rather, the final judge are the ideas and attitudes of the members of individual game groups. But, rehashing old opinions about our hobby is not the point of this post.

Those sentences from the 2nd Ed. DMG reminded me of a passage at the beginning of another favorite rpg, Encounter Critical. I don't have any doubt that the author of E.C., S. John Ross, was familiar with that very passage or, at least, similar passages from various old rpgs. In the intro to E.C. he, in the voice of Hank Riley, writes:
"...you can enjoy the assurance that this is the only game we know of to include True Scientific Realism in every system. Combat, especially, derives from actual battle experience and from extensive research into the theories of tactical interplay... This is a complete fantasy and science fiction game in a single manual, but it is also the beginning of your greatest scenario, a foundation on which you can build."

Perhaps these two passages are not as identical as I had initially thought but they certainly bare a resemblance in tone as they both imply; "this is the most highly playtested game to our knowledge." E.C. is a lampoon of the old style rpgs any way, but a very functional game itself, and that makes the comparison and likeness appropriate.

So, thanks to Zeb Cook and his team that created 2nd Ed. AD&D and thanks to John Ross and Dave Insel and Cody Reichenau for Encounter Critical, I have two more things to ramble on about as I approach my senility.

What was that weasel doing in the cobbler's shop anyway?

This novel, based on the cover art, title and tag line, appears to be a harmless enough, if trashy, sci-fi novel. Some might describe the tale as total trash and young men, and women, might find it to be their wildest dreams in print. Mr. Comstock, who has no internet persona that I could find, has succeeded in writing a novel with more smut than one of the Gor series, which stay within the definition of soft-core. If works of fiction had a rating system, as movies do, this book would be rated X.

The plot is well written and, believe it our not, entertaining. The story is part Star Wars as written by Craig Shaw Gardner and part Law & Order featureing I-Robot written by Henry Miller. So, it is hard to imagine that the creative plot scenes where written by the same writer as the adult content. I’m willing to bet that the whole affair was probably written by committee. The book was a fun and unexpected side trip from my usual and much less sexy reading material.

Of course, when I say it is well written, this is to say the book is as good as most, or a lot of, mass market fiction. Since I could find very little information about the book on the internet I suspect that most the copies of Mr. Comstock’s work have been returned to pulp and the world will be none the wiser.

Dialogue from the inhabitants of Encounter Critical’s Mighty Land of Vanth inserted into an anonymous old comic. 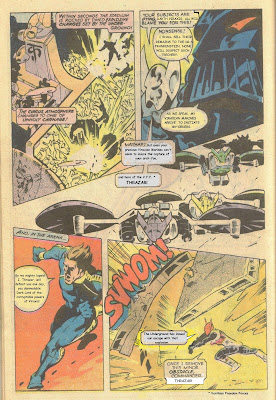