"In a corporate controlled future, an ultra-violent sport known as Rollerball represents the world, and one of it's powerful athletes is out to defy those who want him out of the game." 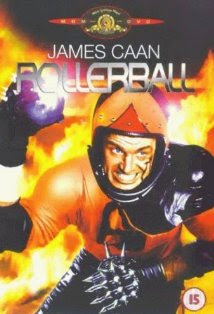 So, this film came out in 1975, I was eight years old, and here I am watching it for the first time thirty-five years later. If that seems unbelievable than you will not believe that I viewed the film via a video cassette player. One of my rpg pals had the tape of Rollerball on his shelves and allowed me to barrow it and I still have my old VCR, just in case I wanna watch that original release of Blade Runner I have hoarded among the rest of my priceless treasures.

If this film had any redeeming qualities they would be, James Caan, John Houseman and, without question, Maud Adams. Watching this film is a history lesson in entertainment. I have to ask, what where these people thinking when they made this movie? I pretty sure they were thinking that Sci-Fi was going to be the next big thing in film and they wanted their slice of the pie. Caan plays a conflicted athlete, honestly none of the guys in the move where believable athletes. But Caan is too soft spoken even for the introspective, question authority type that he supposed to be here.

I find it very difficult to complain too much about any film that includes Maud Adams. Eight years after she appeared in Rollerball she was still hot enough to play Octopussy so who's complaining?

Rollerball does succeed at, what I believe, was the intended goal to make a movie that is “over the top. “ I can’t imagine what a sport which combines gladiatorial combat, roller derby and motorcycles could possibly be except over-th-top! This is another idea which screams to be used in an Encounter Critical adventure and I’m sure the ideas been used in some old Gamma World, D&D or other rpg in someone’s gaming past.

I am a sucker for my own little view of film history thus I wanted to see the original version of Rollerball which was remade in 2002. The original is slowly paced which is often a death sentence for films. I feel that the 1975 version of Rollerball is like Logan’s Run. Both these movies are vaguely entertaining and can provide some good ideas role playing games. But, neither of these films is award winning entertainment. 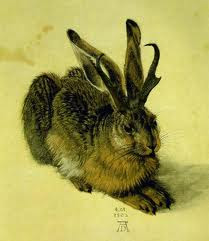 The Razorback Jack is uniquely suited to for survival in the wilds of the Might Land. They are now able to attack any opponent with their antlers and possess the natural defense of their quills which will inflict damage on any animal which comes in contact with the Razorback Jack. Each successful attack by the Jack-o-lope will require their opponent to make a successful Dexterity save or suffer an additional 1-6 points of damage from the quills.

When the Jack-o-lope is successfully subdued, killed, their meat is still a popular food stuff among the woodland folk, and dwellers, of Vanth. A healthy, average sized, Razorback Jack will command a cost of 5 copper pieces, or 5/100th of a gold credit. The horns of the Jacks are favored among woodland craftsmen and women. A pair of antlers sell for about as much as the meat.

A gentleman named J.J. writes a blog titled; More & Bigger Loot, and he occasionally writes about his Encounter Critical ideas. Most recently he has written a random chart to determine the size of the monsters which are encounter in the game. I thought this was a great idea and just had to give him kudos for his creativity. What’s a kudo anyway? I'm still lurking about the fringes of the blog-o-sphere. I've just been a bit preoccupied with real life lately. My gamer A.D.D. has been in full effect, I have three or four writing projects and haven't completed anything with any degree of expediency. I did come up with the following idea which I'm surprised hasn't been produced before. At least, I have never seen it represented around the internet.
I introduce to you all;

Sponge Bob and the Masters of the Universe! 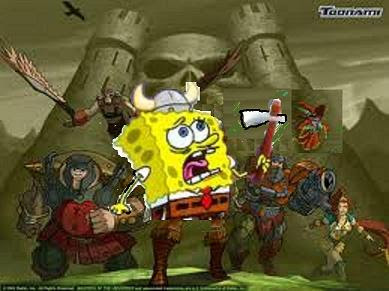 Encounter Critical made me do it!