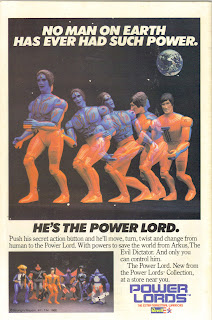 I've been spending a bit of spare time down at the comic book shop. They don't know my rep. as an old school game geek but I think they are beginning to get the picture. (Maybe I'm just one of the quieter geeks?) I found a copy of Atari Force #1 on the 2 for $1 table and this photo is the ad from the back cover.

I don't recall the Power Lords toys. I was a high school student in the Atari Force days and more interested in reading the comics and playing some Basketball or Gamma World than acquiring the toys which co-responded with the comics.

I'm still lurking about and am, of course, grossly behind schedule on any projects I should be completing. The Adventure Capitalist have been roaming the halls of the Temple of Elemental Evil for about a month now and had a near TPK a couple of weeks ago. (We play each Tuesday evening, usually.) Funny, no mater how long we play frpgs, we seem to make the same silly mistakes over and over.

My main point here is, I just wanted to post this lovely illustration as a bit of gonzo gaming inspiration. I found this via Tumblr/Goddess of Smut. It's apparently by Chris Achilleos. 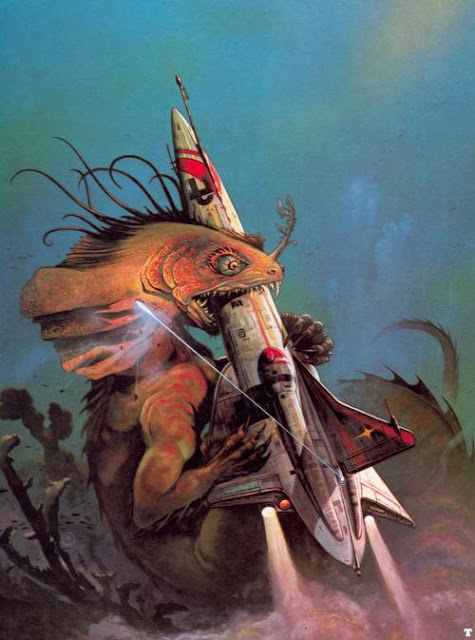 The LotFP July Grand Adventure Campaign has ended at Indigogo and you probably don't need to get your news or information on this topic from me. Perhaps we should just file this post under; Note to Self.

You can read the official wrap up at the LotFP blog, and probably have. Four of the nineteen campaigns funded, each was project had a funding goal of $6000. Yes, I contributed to each of these four projects. I didn't expect two of them to fund. I also contributed to one of the projects which did not fund.

I will be happy to be receiving prints of three new adventures some time in the near future and a pdf of a fourth adventure. Will I use them for Encounter Critical or Labyrinth Lord, only time will tell?

Besides the perks of these funding campaigns, my reward from this experience is; words and imagination are valuable. Of course, I have known this fact a long time but, perhaps now I'm reaching a point where I can use this knowledge. If I should ever attempt a crowd funding campaign, I believe I'd set my goal at $350. Would $350. pay for my time to write a "professional" adventure? No, but it would be a starting point and if I did a second crowd funding campaign I could set the goal at $650.

On the other hand, this is all just crazy talk and speculation.