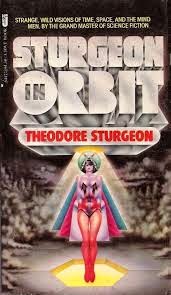 I would be hard pressed to define classic Sci-fi Lit. any better than simply referencing Theodore (Ted) Sturgeon who was a Pulp Era Sci-fi writer and early television and film writer. Besides his pulp contributions, Sturgeon is probably best known as a writer for the Original Star Trek series. Sturgeon in Orbit is a collection of five stores published originally from 1951 to 1955 in Fantastic Adventure, Planet Stories, Fantastic, Startling and Other Worlds magazines.

These five tales which transcend most Pulp Sci-Fi,  are more than adventure stories. Sturgeon explores the nature of humanity and the essential function of human relations through this collection. The first example, Extrapolation (Fantastic, 1953), begins as a tale of loneliness. Wolf Reger was a man so intelligent that he is almost prophetic. He "had so many talents that they were past enumerating."  Reger could master science, math and engineering. He could predict actions and reactions, or extrapolate, for every invention he created.  Reger's weakness was his relationship with humanity.  In fact, their ignorance and lack of foresight  would occasionally drive Reger into a rage. For this reason he could not work or live near his fellow humans. He lived alone until discovering a women who had attempted suicide who he nursed back to health and married. Reger's reformed attitude of humanity, based on his new romantic love, leads him to save humanity from an alien invasion. Isn't that the basis for most pulp era Sci-fi tales?

In the introduction to Sturgeon's novel Godbody, Robert Heinlein wrote that  Sturgeon's message was that he loved us all. The same can be said of Sturgeon in Orbit as each of the stories is about humanity and science. I believe that few would argue that Ray Bradbury loved us too. Anyone who would write a novel in defense of artistic expression and preservation of knowledge and creativity like Fahrenheit 451 obviously cares.

When I begin to read the work's of Sturgeon or Bradbury, I am not seeking an investigation into the nature of human civilization but this is how these men approached their art. I  would choose Fahrenheit 451 over The Martian Chronicles if reading for pleasure. I will add, about The Martian Chronicles, it is a bizarre book when the passages I enjoy most are an homage to The Fall of the House of Usher and a piece about the opening of the first Hot Dog Stand on Mars.

Catching up with Gardner Fox.

As usual, I have shelves full of old Sci-Fi and Fantasy novels and, in the interest of Spring Cleaning, I have been thinning the herd. I have most recently read these two books by Gardner Fox.

Kyrik: Warlock Warrior; This one is pretty racy, sexy for a tale that was first published in the 1950s. It is "in the tradition of Conan" but I've never read anything this sexy from R.E.H. Perhaps De Camp edited all the sex out? Oh, it appears Kyrik was published in 1975, thus the sexually liberated nature of the content.

The Hunter Out of Time is Pulp Sci-Fi at it's, often disjointed and illogical best. This twisted time travel tale reminded me of the writing style of Lionel Fanthorpe. Which certainly is not meant as an insult to Gardner Fox, whose literary achievements speak for themselves. 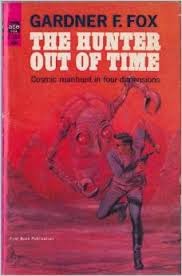 Both books were great fun and true testaments to sunny days and the simple pleasure and relaxation of reading. 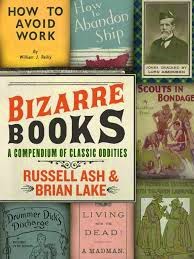 This is not some lost list of role playing tomes. Rather, it is a compilation of of awkward titles of published books. Most of the titles listed are publications from Great Britain, the edition which I have just read, the first U.S. publication, is from 2006. Bizarre, comical, intriguing or just plan wrong, Ashe and Lake have included book titles that will capture the interest of anyone brave enough to investigate their compendium.

How does this fit into a blog which is usually about Weird Fantasy Role Playing Games? Let me start with The Planet of the Knob Heads by Stanton Coblentz which appears to have been printed in the old pulp Science Fiction in 1939. The internet has a hand full of references to what was potentially Mr. Coblentz's masterpiece, but there is no archival existence of this piece that I could find. I did, however, find six results for Coblentz on the Internet Archive. Three of these documents are publications of Amazing Stories, there we are sure to find some fodder for any Weird Science RpG we're working on.

Some of the book titles listed could easily be fictional titles from Weird Science lit;
There is 215 pages of this stuff. As the following examples from the first two letters of the alphabet will illustrate, possibly the most useful info for an rpg is the list of authors' names.
I'll consider that the names of the city council members for my latest Encounter Critical  burg, Nuevo Brussels. I also consider this further proof that wacky ideas and inspiration can come from anywhere. Inspiration doesn't have to be limited to High Lit. or the latest episode of Teen Titans Go!

Lastly, enjoy this phasic tune which I'm sure Hank and Jim listened to during the composition and play testing of Encounter Critical.

I am a sucker for these old Lin Carter anthologies. They contain the best of, at least, three generations of Fantasy Fiction. The first two volumes both contain tales by Robert E. Howard and Clark Ashton Smith. Both volumes have new or rare material from Fritz Leiber, L. Sprague de Camp, Jack Vance and Carter. The tales which I often enjoy most are from the young writers of the time. Vol. 1 of The Year's Best Fantasy Stories features newcomers Pat McIntosh and Charles R Saunders. There is also a piece of lost history of Middle Earth as told by Marrion Zimmer Bradley, The Sword of Dyrnwyn by Lloyd Alexander and a posthumous work by Hans Bok. Every sentence is classic, enduring fantasy enjoyment and most of these folks are listed as inspirational reading in Appendix N of the Advanced Dungeons & Dragons: Dungeon Master's Guide.

2014 was a quest of personal accomplishment for me which I have completed with success. I am now free of the literal and proverbial text books, free to read any smut, pulp or trash that I may like. And free to wonder the wastelands of fantasy role playing enthusiasts, a journey I hope to renew and share the travels of the polyhedral dice bag.