Over at my other blog, Fanatical Recycling Inc, I'm attempting to write about 52 beers in 52 weeks. I'm trying to focus on the micro breweries of Tennessee and Western North Carolina and, may venture into Georgia and other Southern states. I didn't have time to write the blog last week and hope I can write an additional entry this weekend.

Okay, here's some rpg news; in our Nightwick Abbey game, my M.U. has finally reached level 2!
I hope to write about more items from Saki's Varied Menagerie soon too.

The Fuchsia Feline of Saki the Satirist

Of all the lack of knowledge that has survived the ages about Saki, the master magician known as The Satirist, it is certain that he had a keen since of irony and obscure since of humor. Scholars suspect that the items of Saki's Varied Menagerie where probably most useful to Saki while mysterious and annoying results accompany modern attempts to use these items.

Saki's Fuchsia Feline, a grouping of five pink beads, allows Warlocks to summon and communicate with a domestic cat. The cat, when summoned, has never, reportedly, been fuchsia or pink in color. The purpose of summoning the cat is to employ it as a spy, because who would suspect that a house cat could reveal their most intimate secrets? Scholarly attempts to employ the Fuchsia Feline and subsequent house cat have mostly failed. The cat generally reports on the contents of a grocery list, the idle desires of young princesses or the cat has taken a nap when it should have been spying.

All other stats for the Fuchsia Feline are up to the individual GM.

The Varied Menagerie of Saki the Satirist

Saki the Satirist is an ancient Vanthian Warlock from millennia before the Fall of the Sky Monsters of the Galaxy. Certainly, Saki developed his skill, veritable mastery in the mystical arts, ages before the Waepeta Sorcerers and may have been a founder of the Mummified Bards. His legacy still exists in the remaining contents of his Varied Menagerie, including the Granite Gray Wolf, the Fuchsia Feline, The Cream Jug of the Cosmos, The Ransom Note of the Grim Reaper and, among others, The Playwright's Quill.

The Granite Gray Wolf is a simple, crude, gray carving of wolf. A Warlock or other practitioner of the mystic arts, while in posession of the Granite Gray Wolf, may summon, at random, a small pack of wolves. Once the summoning is concluded, in keeping with the satiric arts of Saki, the pack of wolves will appear at some random time in the future. Tradition holds that the wolf pack is unlikely to appear while the Warlock and friends are beset by highway men, rather the wolves are most likely to appear when the Warlock is holding court with some noblemen or religious officials.

Stats: The Granite Gray Wolf will randomly summon as many as 2d10 wolves. The number of wolves summoned and time of their arrival is left to the GM's determination. 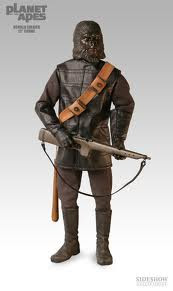 The Enchanted Bandolier of Oop' Oop' Aru is another of many legendary items associated with this, one of the most famous, Ape Sultan, Diplomat and Military Leader. The Bandolier of Sultan Aru, appears rather plan but is reputed to enchant the marksmanship of the warrior lucky enough to possess it. As with most Vanthian relics of legend, the Enchanted Bandolier is often duplicated by under skilled craftsmen from Blackhawk to the Mercenary Coast. Unfortunately neither the craftsmen nor historians know if Commander Aru wore a bandolier of single or double belt design.

Stat: Ordinary leather Bandolier, or two, provides 5 to 10% bonus for ranged attack in Encounter Critical or +1 or 2, GM's choice, in d20 based games.

--This post inspired by the More Magic Weapons Please! request by Arcadian at No Signals! (Insert Dave Chappelle comment here.)