Help needed to recreat the art of Deities & Demi Gods

I am sure that most of the rpg blog-o-sphere is, by now, familiar with Kickstarter programs. And, you have probably heard that Jeff Dee is recreating long lost illustrations from Advanced Dungeons & Dragons. (I'm assuming you all know this story.)

Now, if you have a buck or twenty, is the time to help with another Kickstarter program. This one is to recreate illustrations from Deities and Demi Gods that are the work of Diesel LaForce. There are only five days left to fund this project but over $1500. needs to be raised. You know you need another old school illustration to decorate your huge ruined pile. (I mean humble domain, of course.) When payday rolls around this weekend you can treat yourself, and some loved ones if ya like, and pledge your support to this program.

Now I'm gonna go up-date my resume and send it to my local NPR affiliate.

Yor: The Hunter from the Future

How have I missed this? It came out in 1983 but it looks like it was produced in 1976. It's got cavemen, cave-women, fire, floods, some funky looking space craft, explosions and more! Thanks to Jay's Gamma World War tumbler page for enlightening me with this Yor promo poster.

Yes folks today the image of Darth Viraxis will be exposed to the world. If you have read the Darth Viraxis f.a.q. you will know what to expect, if not, be warned as you may find the image startling and disconcerting. But first...

I'd like to share a bit of Encounter Critical news. No, Fifth Edition of E.C. is not in the works. In fact, a second edition of E.C. is not in the works, barring the Labyrinth Critical project. But it has come to my attention that E.C. is now being played in, at least, two languages. English we know and now a group of Portuguese speaks have posted their E.C. experience on the entree'-net. You can see some dandy picks from their game session (they had brownies and ice cream!) and read about it here.

Now I drag out Darth Viraxis and Court. First we have my rendering of the Viraxian Guard. These guys are basically Darth Viraxis' Stormtroopers or Red Shirts. Yeah, their supposed to expendable so, might as well get a laugh at their expense. 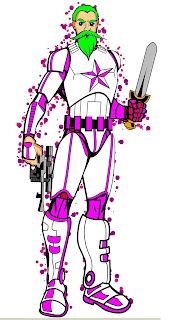 Why's that guy got green hair? Why not and it gives him the distinguished weirdo look, just the look for one of Darth Viraxis' personal guards. Here's the man himself, the titanic tyrant of the Might Land and parts beyond... 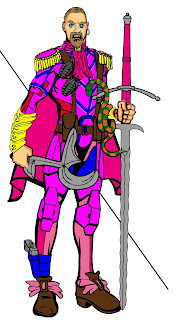 I will not go into the details of why D.V. wears fuchsia armor exclusively. Despite his appearances, he is not a man to underestimate. After all, he is the commander of the Empire of Darth Viraxis! About the image design, I wish I had given him a flint lock pistol in his right hand rather than that weird looking blade he's holding but it's good for now.

Here are the guys that you, player characters, don't want to tangle, or tango, with. `The Virazian Marines are my red flag in the game, they enforce game balance and plot continuity. Player Character stats go to a possible 18, the Viraxian Marines stats go to 20. If the P.C.s are level 1 then the V.M. will be level 3 and they will always have superior weapons and technology too. So be sure not to make fun of the fuchsia insignia on their armor. 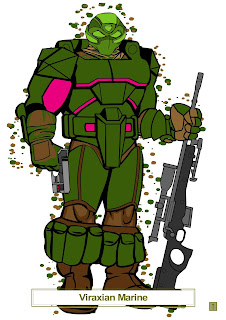 I've made a few more images for the Vanth setting. I thought I would try to represent all of the possible races. I have done a few Frankensteins and an Ape Sultan commoner but haven't done an Amazon or a Lizard Man. I don't really fell a need to produce images of these last two. Hero Machine really isn't designed to produce Robodriod images. Oh, I did make one Vulkin but haven't done a Klingon yet. I'll roll out whatever I can throw together over the next week or so.