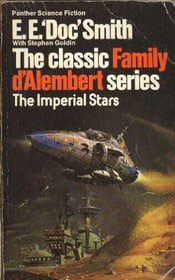 Doc Smith is often credited as a major influence upon George Lucas and the characterization in The Imperial Stars could easily be developed into movie or television personalities. The Imperial Stars is one of Smith's later works, published in 1976, co-written with Stephen Goldin. The tone of this tale reminds me of the works of Alfred Bester. Like Bester's The Demolished Man, The Imperial Stars reads like an old pulp mystery or espionage plot set in a sci-fi or advanced technological society.

Just a plan ol’ quick and fun read and it's avaliable from Paperback Swap.